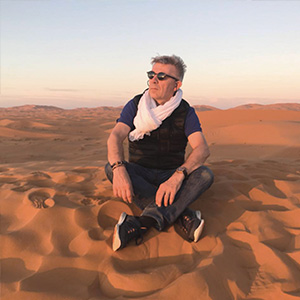 Son of the landscape painter Marcel Laquay, he was introduced to drawing and field painting at an early age and very quickly adopted the pseudonym of Ronel, his mother's maiden name.
Aggregated in plastic arts, he teaches at the National School of Applied Arts and Crafts Olivier de Serres in Paris from 1990.

The Rollin Gallery will be the first to present his works from 1980, since this date, more than a hundred personal exhibitions have been devoted to him, in France and abroad, both in galleries and in centers and museums in Paris, Lille, Amiens, Le Touquet, La Baule, Rouen, Barbizon, Brest, Chartres, Grenoble, Lyon, Montpellier, Nice, Saint Jean De Luz, Saint Malo, Port Cogolin, Brussels, Casablanca, Marrakech, Sousse , Hanover, Palm Beach - Florida, Singapore and Tokyo.

His work has been the subject of major solo exhibitions at the Château de Vascoeuil, Saint Georges de Boscherville, Clères, Montivilliers, the Palais Bénédictine de Fécamp, the Hôtel de Région de Rouen, the Archives de Chartres - Conseil general of Eure et Loir, at the General Council of Seine Maritime, in the Brittany Ferries collection and at the museum of Nice: Galerie Renoir and at the museum of Brive: Chapelle Saint Libéral, at the National Gallery of Taipei - Taiwan, at the Ulsan Art Festival - Korea, MATMUT Contemporary Art Center - Saint Pierre de Varengeville.

In addition it was also presented at the Abbey of Cercanceaux - Bourdelle Museum, Paris - Postal Museum, Paris - Fine Arts Museum, Le Havre - Louviers, Châteauroux, Chartres, Aix en Provence, Girona, Sarajevo, Shanghai, at the art and culture center - Taegu, Korea - at Sarria - Spain, in Japanese museums: Matsumoto, Fukuoka, Nagano, at the Tokyo International Forum, at the Aoyama Spiral Hall in Tokyo, at the National Art Center in Tokyo, at the National Museum of China in Beijing, at the Chinese National Museum in Tianjin, at the National Gallery in Taipei - Taiwan, at the Ulsan Art Festival - Korea. 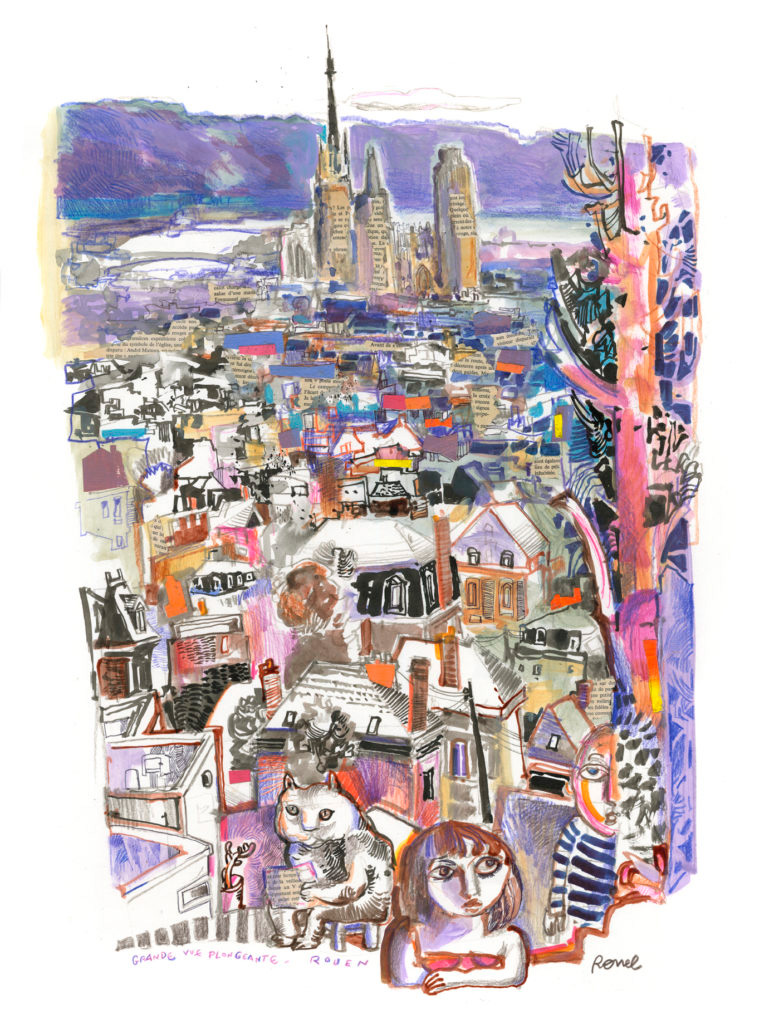 Mixed technique on paper, reinvented vision of Rouen seen from the hills.
I attach capital importance to cities because I find there a conglomeration of paradoxes, contrasts and encounters.
I have often drawn and represented cities in Africa, Asia and America, but I must say that the urban area of ​​Rouen where I live and where I come from is for me a subject with great potential.
This composition is part of a series of creations on paper 65 x 50 cm devoted to views of the city from the hills, a possible preamble to a development on this theme that can be found at my next exhibition in Rouen at the Rollin Gallery
December 2021… 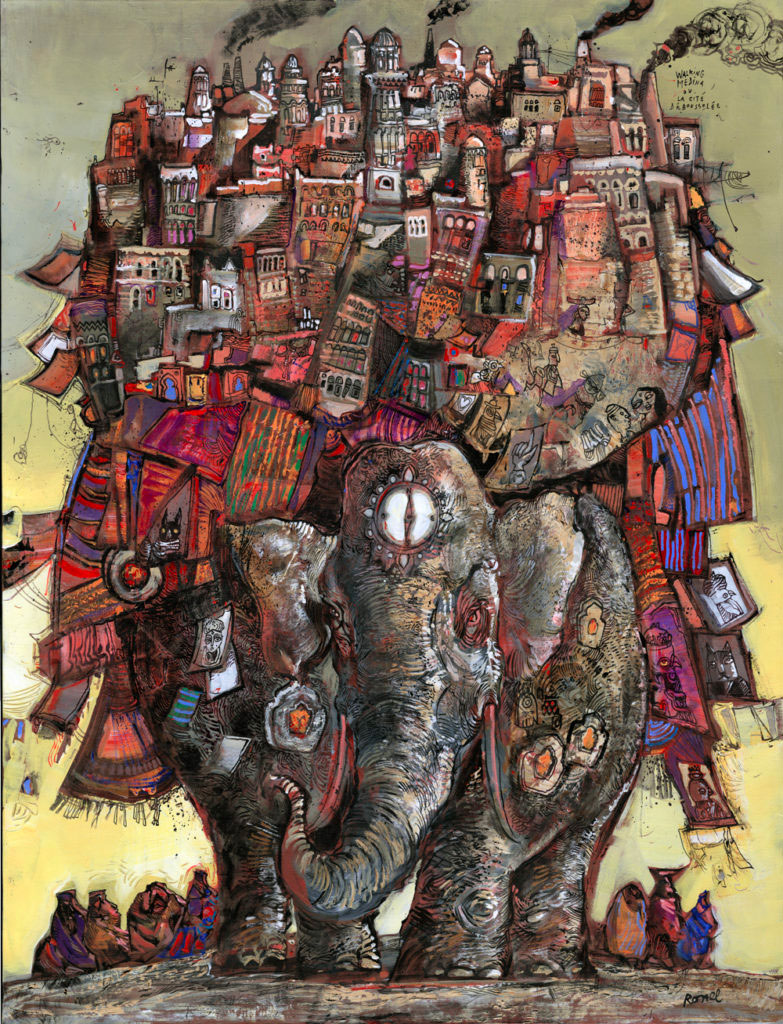 Walking medina or the disoriented city

This painting seems to me to be a rather emblematic painting of a part of my themes which are attached to universes in movement. Thus we can see an elephant seen from the front which supports a city on its back and a whole array of pendants, charms, talismans.
The city seems immemorial with its ornamented facades of casbahs, its oriental windows, its architecture with Yemeni motifs. Painting opens the paths of the imagination and gives cities the possibility of wandering and crossing deserts on the back of pachyderms.
I find it funny that my colossus, transporter of utopia is displayed in a bus shelter station. 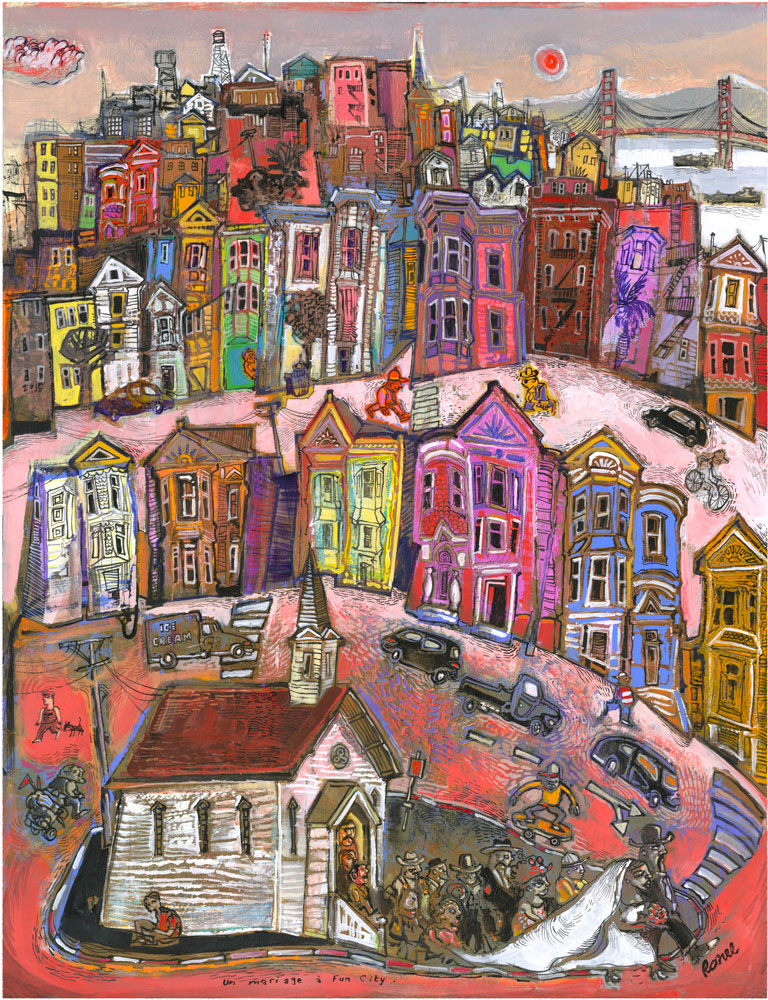 A wedding in Fun City

This painting evokes San Francisco, one of the cities that I was able to survey and draw, I
represents the piling up of streets and the strings of pastry-coloured houses, those Victorian wooden dwellings known as the painted ladies.
The street is a theater, in this series, the cycles, the vehicles, the signs are translated there like toys in a jostled perspective, on a tone with almost naive accents.